One of my favorite things to do in the summer on Saturday mornings is to go to my local farmers market. When I was there this week the peaches and fresh blueberries looked so yummy. As a girl growing up in Wisconsin, we ate a lot of cobbler. But it was almost ALWAYS a single fruit, like apple, or blackberry, sometimes peach.

It wasn’t until I moved to Oklahoma that I was introduced to the idea of multiple fruits combined together in a cobbler…..
………But BOY do I like that idea. I’m calling this the Tri-fecta because you have the sweet flavor of the sliced peaches, followed by a burst of blueberry, combined with the juiciness and rich texture of the ripe cherries, all topped with a crunchy crumbly top that is set off with the occasional richness provided from big pieces of pecans that have a wonderful toasted flavor. And when served warm over ice cream….well life doesn’t get much better than this.

The BEST part is that it is really easy to make. 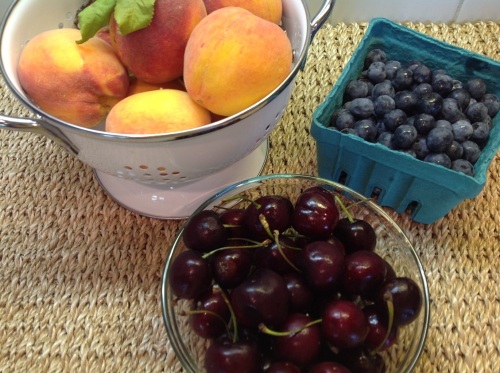 I started with fresh peaches, blueberries, and cherries. You can use frozen fruit but in the summer when the fruit is fresh…I would definitely take advantage of it. If you want to use some other combination of fruits…please feel free. I like apple and blackberry, as well as peach and blackberry.
If your using fresh peaches you will want to peel them before you slice them up. (you will want about 2 cups which is 4-6 peaches) I like to take a large glass bowl fill it with some water and put it in the microwave a few minutes until the water is hot. You can also do this on the stove.
Drop in the peaches, making sure they are completely covered with hot water 1 to 2 minutes.

Then pull them out and submerge them in cold water. 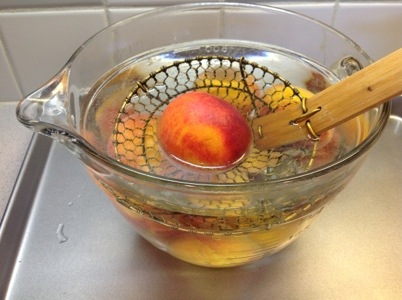 Now you are ready to peel the peaches. The peeling should come off easily with a small sharp knife.
Slice the peaches into a bowl. (That way you capture all the yummy peach juice)

Most recipes call for putting lemon juice on peaches to keep them from turning brown. I take a more softer approach. Lemon juice can be too overpowering. So I will either sprinkle a tsp of pineapple juice or a tsp of Sprite or ginger ale over the fruit to keep it from browning.
Cherries: (1 cup)
I love just snacking on these in the summer time, but for this recipe we need them pitted. So first either “Apron up” or make sure you have on something that doesn’t mind pink freckles. I also work over a paper towel lined cookie sheet, since I have an ugly Formica counter that “pink freckles don’t look so good on. ”

I’m a gizmo kinda gal so I use my handy dandy cherry pitter to get that guy out of the middle.
Then I slice them in half and put them in a bowl. 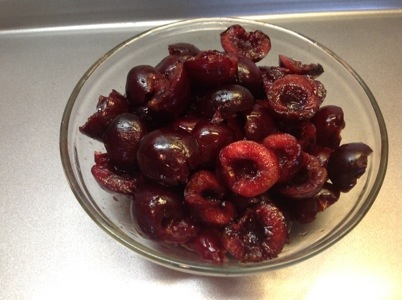 Blueberries: (1 cup)
Well the best part of blueberries is that all you have to do is wash them and make sure none of them are shriveled up or have any tiny stems on them. I didn’t bother taking a picture….think you can figure that one out by yourself.

To make the cobbler:
In a large pie plate or quiche dish, put the sliced peaches in the bottom of the pan.

Sprinkle 1 1/2 tsp of good cinnamon on top of the peaches. 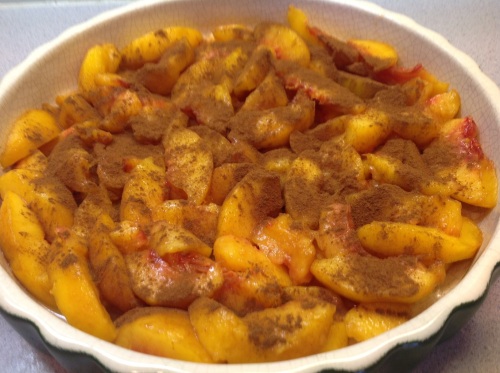 Sprinkle on the blueberries next.

Followed by the cherries. 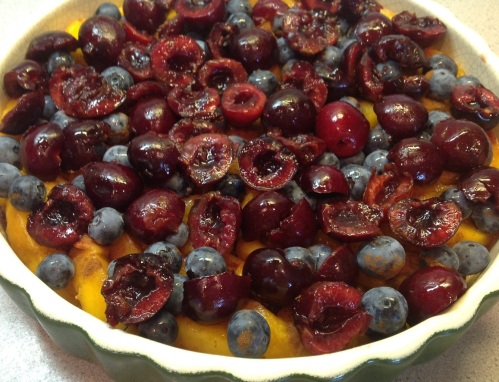 Time to make the topping. 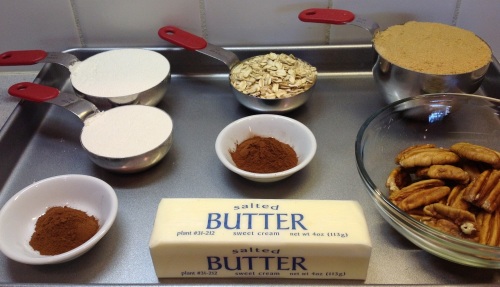 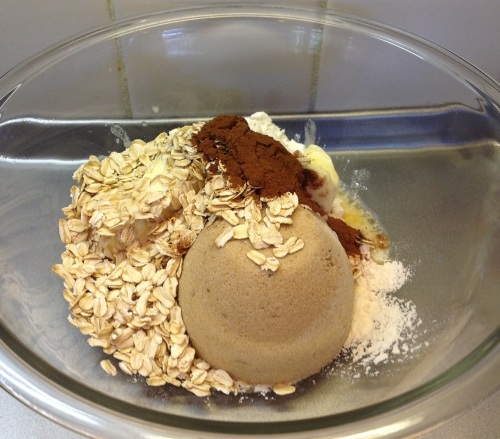 Sprinkle topping on the fruit.

Then top with pecan halves.

Bake at 350 degrees for 45 to 50 minutes until crust is slightly browned and fruit is bubbly.
Remove from oven and cool before serving…

Or if your like me, get a bowl…dish up some cobbler, add some vanilla bean ice cream…and maybe a little more cobbler…..mmmmm mmmmm mmmmm

You can find the entire recipe at:

Like Loading...
This entry was posted in Desserts, Recipe Box and tagged blueberries, cherries, cobbler, Dessert, peaches. Bookmark the permalink.